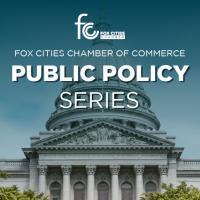 We all know that there is a workforce shortage in our region and state. The recent decennial census has indicated our state’s population growth is flat. What does this mean for our communities and businesses? Population trends impact federal funding, reapportionment for representation in the House of Representatives and business decisions.

This Public Policy Series will investigate the population trends of Wisconsin and the Fox Cities and how these trends will impact our economy. We will also discuss policy and programmatic solutions to our talent shortage.

Mr. Winters is a nationally recognized expert on human resource challenges in the competitive global economic environment.  Mr. Winters has presented on the increasing value of talent to numerous audiences, including the Milken Global Conference, the Society of Business Editors and Writers, the National Association of State Legislators, and the Council of Chief State School Officers.

He has served as an advisor to private industry, government agencies, and elected federal, state, and local officials.  Mr. Winters has testified before governmental investigative bodies and appeared in television and radio interviews and been quoted in the national press such as the Wall Street Journal, Investors Daily, USA Today, the Christian Science Monitor, the Journal of Commerce, and the Swedish equivalent of Business Week, as well as many local newspapers.

Dennis Winters’ current titles are Chief Economist, Director of the Bureau of Workforce Information and Technical Support, and Labor Market Information Director for the Wisconsin Department of Workforce Development.
Mr. Winters has authored many studies on economic development in Wisconsin including Wisconsin’s Economy in the Year 2010, Wisconsin High-Tech Opportunities, Economic Development Strategies for Neighboring States, the Northeast Wisconsin Economic Opportunities Study, and The Impact of Population Aging on Wisconsin’s Labor Force. He has co-authored The Economic Returns to the Education System from Investments in Four-Year-Old Kindergarten for Wisconsin and Estimating the Size of the ITP Economy.

Mr. Winters has been a consulting economist for over thirty years including senior positions at Wharton Econometric Forecasting Associates (WEFA), DRI / McGraw-Hill (now combined into IHS Global Insights).  He was Vice President and Director of Research for NorthStar Economics.
Dennis Winters was educated at the University of Wisconsin - Madison and Colorado State University.

Since 2013, Rep. Dave Armstrong has been working to grow the local economy as the Executive Director of the Barron County Economic Development Corporation. His work has helped Barron County to be ranked 6th among the fastest-growing counties in Wisconsin. He also led efforts to assist entrepreneurs to start new businesses, introduced an economic gardening initiative to help existing businesses to grow, championed additional workforce training programs, and led the initiative to address the acute housing shortage in the area. These efforts assist all residents, businesses, and municipalities in the region.

Rep. Armstrong has been heavily involved in the community, previously serving two terms on the Rice Lake City Council. He’s currently a member of the Rice Lake Utility Commission and Rice Lake Tourism Commission, Rice Lake Chamber of Commerce board member, past President and current member of the Law Enforcement Foundation of Barron County, and a volunteer mentor at Rice Lake High School.

In addition to his service in local government and community groups, he was successful in the private sector, starting two different companies in the medical field. He also served as the Vice President of Substance Abuse Services for Healthcomp Evaluation Services Corporation then ClinNet Services LLC.

Rep. Armstrong lives in Rice Lake with his wife, Janell. They have four grown children and three grandchildren. Their youngest currently serves in the Marine Corps. Dave is an avid sportsman and is active in both his church and the community.